The day that I visited the Path for Learning About Nagatoro’s History and Nature, I almost didn’t make it past the first few kilometers. This had nothing to do with the difficulty of the path — it’s not difficult by any stretch — and everything to do with the vast wealth of attractions that the town of Nagatoro has to offer.

To start with, there’s the Arakawa River, which is great for swimming, kayaking, taking a traditional wooden pole-boat tour, or even jumping into deep pools or just taking a scenic walk along its banks. I was so enticed that I almost didn’t leave. However, there’s more.

Right near the best swimming hole, not far from Kami-Nagatoro Station, is the Nagatoro Natural History Museum, where you can learn all about the local geology and ecology. From there, walk down the river path while watching the boats laden with tourists pass by until you reach the main Nagatoro Station, where you’ll find a shopping street filled with restaurants and gift shops. Follow the main street up towards the mountain and eventually you’ll arrive at Hodo-san Shrine (寳登山), but don’t forget to stop in at the silk museum on your way up the road.

If that wasn’t all, once you finally get up to the top of Hodo Mountain (宝登山), you’ll find a sweeping view of the Chichibu Basin. Feast your eyes on pleasant views of the Japanese Alps in the distance. Finally, for those who have grown tired of the hustle and bustle along the trail up to this point, few of the tourists hike further than the summit, so you’re guaranteed a quiet end to your hike.

Given the constraints of the bus schedule at the end of the trail, I was forced to decide whether I would stay to enjoy all of these attractions or hurry on; in the end, I decided to take the trail.

Up to the Top of Hodo Mountain

The path officially starts right outside Kami-Nagatoro Station. Get off and walk straight down to the road toward the river, then follow the riverside path to is end near the main Nagatoro Station. From there, follow the main road past the restaurants and up to Hodo-san Shrine. From here, getting on the trail up to the top of the mountain is a little confusing as it isn’t well marked, but just look for a road heading up the mountain and you’ll be on the right path — the trail and the road are one and the same, though alternate footpaths do cut straight up the mountain rather than following the switchbacks if that’s more to your taste.

As you climb, you’ll start to get some nice views of the valley below, but the best views are to be found at the top, where you can see sweeping panoramas of the truly high mountains off in the distance, including Ryôkami-yama (両神山), one of Fukuda’s 100 Famous. What’s more, there are quite a lot of nice facilities at the top due to the cable car running up there.  You can grab an ice cream or a bowl of noodles while you enjoy the view.

From the summit of Hodosan, the hike follows a rather leisurely and quiet forest path down the mountain to Highway 44, where you can catch the bus to Minano Station, a couple stops down the line from the start at Kami-Nagatoro Station.

The Forests of Hodo Mountain

As you climb the mountain, take a look at the forest. You’ll notice primarily four varieties of tree: cedar, cypress, sawtooth oak, and pin oak. These trees reveal the legacy of human activity on the mountain. The cedar and cypress form a man-made forest that has been cultivated over the centuries for building materials. The sawtooth and pin oaks grow wild in the open spaces where the former two varieties have been cut away, but afterwards left to nature. These two varieties do particularly well in such spaces is because they love good sunlight, so they take off well in such open spaces.

The pin oak, in particular, has historically been used to make both charcoal and fertilizer, so it’s ended up spread far and wide all over the Kanto. The forests of Musashino, which the earlier sections of the Fureai Trail in Saitama passed through, often consist of this kind of man-made forest. Though these forests were originally tended by human hands, these days they have been left to grow wild.

As a native of the Missouri Ozarks with its famous morel mushrooms, a rare delicacy that locals love to hunt for both to eat and sell, it comes as no surprise to me that a country such as Japan, home of the famous shiitake mushroom, would have a similar tradition. When the mushrooms are in season, it isn’t at all uncommon to see old villagers walking the hills looking for them and other mountain vegetables to bring to market. The slopes of Hodo-san as well are no stranger to such activities. 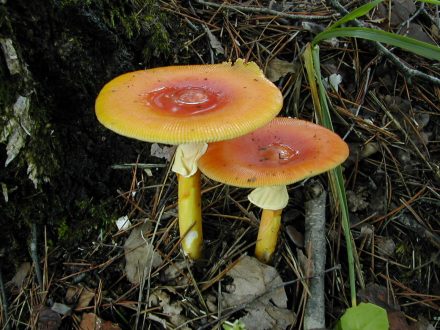 One of the challenges of mushroom hunting in Japan, even for natives, is the problem of names. Japan has only had a nationally designated standard dialect for about 150 years, and, as a result, there still remains many local names for these mushrooms that vary from region to region and even from valley to valley. For this reason, even if you learn the names from a guidebook, you might not actually be able to tell which mushrooms are safe and which ones aren’t. The official stance of the Japanese Park Service is to simply not pick mushrooms at all.

2 thoughts on “Fureai Saitama VII: The Path for Learning About Nagatoro’s History and Nature”