Ôdarumi Pass (大弛峠). It had been about five months since I last stood there. At that time, it was a frigid winter world. Temperatures in those high mountains never even got close to the melting point even at the height of the day, and even if it did the wind chill would hide that fact. Then, the slopes were covered in a deep layer of snow, making each step a treacherous struggle. There was not a sign of human passage save for the single trail of footprints that I had been following for the last day. Sitting in a deserted mountain hut, I tried to decide whether I would push on to those two Famous Mountains, Kinpu (金峰山) and Mizugaki (瑞牆山), or abandon the attempt and return to Tokyo.

Now I stood there once more. On this day I was blessed with a clear sunny sky and balmy temperatures. Green was just starting to appear on the tips of tree branches, and the rhododendrons had finally unfurled their leaves. A layer of snow still lingered, but what remained was melting fast and already marked by the passage of many feet. A collection of tents rose like flowers in spring, and the hut was lively with the sound of chatting hikers, and the smell of cooking curry wafted from the kitchen. 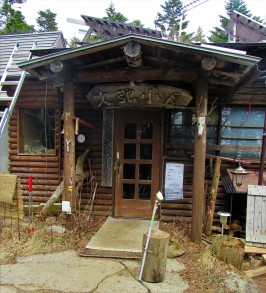 But yet again, I found myself needing to contemplate whether or not to go on to stand at the summits of Kinpu and Mizugaki, or whether to go down empty-handed once more. This time I wasn’t so much hampered by snow as by time. Could I reach our goal and get back down in time to get back to Tokyo in time to catch the 11pm bus to Osaka? Would reaching the tops of those mountains even be worth it if we didn’t have time to savor the experience?

Two days before this quandary, I arrived at Enzan Station (塩山駅) early in the morning on a sunny but hazy May 1st. It was Golden Week, that collection of national holidays grouped at the beginning of the month that resulted in a full week without work or school for the whole country. With the roads, hotels, and major attractions set to be full to the brim with tourists of all walks, I predictably eschewed them all and instead made straight for the mountains, this time accompanied not just by Tianyu but also by an old acquaintance of mine from back in my St. Louis days: Dylan Young, a geologist from Minnesota.

Tianyu, longtime readers will remember, is the first hiking friend I made in Japan, the intrepid amateur hiker who, like me, was foolish or brave enough to attempt climbing Tokyo’s highest mountain in the middle of a typhoon. After a long night drying ourselves next to a blazing woodstove in a mountain hut on the summit of Moss Peak, we naturally became fast friends. Dylan, a new character to grace this blog, is a friend I made when I was a student at Washu. Though not a studying there himself, him and I both happened to be renting rooms from the same landlord in the garden district of St. Louis. Being of the same age and similar temperaments, and both having a taste for good beer, we two got on just fine. Who knew that some years later we’d both be hiking together in Japan?

When Dylan and I arrived at the station, Tianyu was already waiting for us there. Expecting a crowded bus up to the trailhead — we wouldn’t be the only ones attempting to escape the throng by hermitting in the mountains — we hurried down to the bus stop only to find a massive crowd already waiting there, far more than could possibly fit on one bus. Naturally, we were a bit worried about this as buses up into the mountains went out on average less than once per hour; if they didn’t send a second bus then we might end up more than an hour behind schedule.

Waiting for the bus 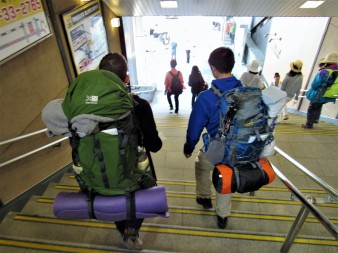 Luckily, after about a fifteen minute wait, two buses rather than one rolled into the bus circle, and in no time were packed tight and on our way up to Nishizawa Gorge.

The two main goals of this particular trip were, of course, Mt. Kinpu and Mt. Mizugaki, those two peaks that slipped through my fingers on my last trip back in the winter. However, at the outset we weren’t exactly clear about how we were going to get there in the first place. Why on Earth would I plan a trip like that, you might ask? Well, it’s mostly due to a couple of my own idiosyncrasies that confounded with the limited routes available to create this situation.

First, as a person rather obstinate about doing things to absolute completion, I was interested not just in summiting the two mountains above but also in hiking out the rest of the ridge, picking up where I left off last in Ôdarumi pass. However, that pass is located in a somewhat difficult to access place on the ridge, so getting there in a reasonable amount of time isn’t exactly the easiest thing to do. The fastest route is, of course, the forest road winding up the north face of the ridge. It’s a comparatively gentle slope going up, but on the downside it’s on the Nagano side, meaning a long and expensive train and bus ride just to get started. Getting on the trail from the southern Yamanashi side would take much less time and money.

From the Yamanashi side, however, the most certain path available is also incredibly long: you have to go up to Kobushi-ga-Take via its south face, then head west along the ridge for more than ten kilometers to Ôdarumi, a route that altogether takes easily more than a full day of hiking. We, however, we hoping to get there by the end of the first day.

A further point that made both of the above routes somewhat unsatisfactory is the fact that I had taken both routes on my last trip and I’m somewhat loath to hike the same section of trail twice if I can help it. After all, every minute I spend on a path I’ve hiked in the past is one minute I’ll never spend on a trail I’ve never walked.

While puzzling over the maps of the area online, however, I found a minor trail going almost directly to Ôdarumi from the Yamanashi side — and what’s more, it went straight through Nishizawa Gorge, which is famous for it’s large collection of scenic waterfalls. According to the map, at the end of the nature trail touring the valley, there was an old path that connected up to a forest road. Following the forest road up the mountain a distance, we could then get on another old path that would connect us with the main trail not far from Ôdarumi, passing along an area ominously called Goblin Ridge (天狗尾根). What could be better?

The problem was, however, that I wasn’t really sure whether the trail was still maintained, and if it wasn’t, whether it would still be passable at all. Certainly if this were the only option I’d have to choose another route: after all, who wants to ruin a whole trip by hitting a dead end before lunch on the first day?

What finally decided me on this route was the fact that there was indeed one more path leading up to Ôdarumi from Nishizawa Gorge. It, like the other, was a minor trail of uncertain condition and on top of that it didn’t go directly up to the main ridge but instead followed a somewhat roundabout route along a spur ridge via a peak called Black Gold Mountain (黒金山), a route that I estimated would be a seriously hard one day hike or a day and change at a more reasonable pace. Taking such a route would certainly place us in danger of not being able to get back in time for the midnight bus to Osaka.

Certainly it wasn’t an ideal route, but since it gave us an alternative if the preferred route wasn’t accessible, it made our minds up: we’d head up Nishizawa Gorge and then take the shortest path that was open, with the hopes that at least one of them would be. So it was that he hit the trail on May 1st without really knowing how things were going to turn out. This seems to be the way most of my trips go.