The day after the storm wasn’t bright sunny as I had hoped — rather, it started off with a shroud of mist. But, thanks to my campfire, I was completely dried out, and though the morning air was cool, even in my running shorts and T-shirt, I wasn’t at all cold so I set out in high spirits. The ascent was incredibly steep for a while, but once I reached a certain height on the ridge, things began to stabilize a bit. I was making good time and felt I had a good chance of making for the time I lost the previous day. I passed the landmarks one by one:

The trail starting off. 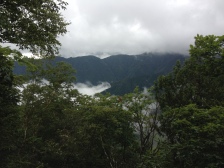 The previous night my companion had mentioned seeing other huts like the one that we stayed in, but mentioned that none of them were in as good of condition as ours. I figured he was referring to a few places marked on the map that ended in the character ato (跡), meaning “ruins” or “remains.” Some time after I started, I came upon one of them: the remains of White-Boulder Hut (白岩小屋跡).

When he said they were in bad condition, I didn’t expect anything this bad — the building was in a state of total decay, the interior a mass of filth and rotting blankets. The place had clearly been completely abandoned without even a cursory attempt to salvage anything. I had to wonder what had led to such a situation. My best guess was that the national park service of Japan overestimated demand and built too many shelters on the mountain, leading some of them to be abandoned when they turned out to be unprofitable. I had seen similar abandoned huts when I hiked Mt. Fuji some years before, though they were more easily explained by the fact that a road now went halfway up the mountain, making all of the shelters below that point useless.

While poking around for a bit, I noticed a small sign indicating that a side-trail led to water. Having completely finished one of the two two-liter bottles I was carrying, I decided to go fill up. Even though I didn’t have any purification tablets, I reasoned that a case of diarrhea was preferable to dying of thirst.

A view down the side of the mountain. It’s a lot steeper than it looks.

The water collection point, a trickle of a stream destined to become a river somewhere.

My spare bottle filled, I prepared to depart the ruin. And then it started to rain. By the time I reached the summit of White Boulder Mountain (白岩山, 1921m), it was coming down hard. So much for getting dried out the night before.

White-Boulder Mountain. Wasn’t much to see.

I trudged along through the rain past Imo no Ki Dokke (芋の木ドッケ, “Potato-Tree Peak, 1946m), Daidawa (大ダワ), and on to Kumotori Lodge. The lodge was quite an impressive place, doubly so considering my expectations from the ruins I had seen earlier. It was a two story high cabin, perhaps two school buses long, with hardly a sign of wear and tear. Of course, to me, as wet and cold as I was, it could have been an outhouse and I would have been happy to see it. I immediately went inside.

The lobby sported a wide genkan, and beyond a bin of slippers; to the right was a vacant desk, beyond it a few benches and some heaters, and directly ahead of me was a refrigerated glass container filled with drinks, including beer (￥500 or about $5 for a 12oz). Although I ordinarily would be rather enthused at finding out I could get an ice cold beer on the side of a mountain, in my current state the thought of drinking an ice-cold anything didn’t appeal to me. Rather, I was more interested in getting my feet out of my wet shoes and warming up a bit. I immediately proceeded to the former activity, the second being somewhat more difficult. Grabbing a pair of slippers from the bin, I proceeded to explore the establishment.

I walked the entire building from one end to the other, first and second floor. Each room was completely empty of occupants, and the dining hall was also empty. It was as if the entire place was abandoned.

It seemed strange that there was no one here since the place seemed fully functional, with electricity running and all. I figured someone had to be around, but since I didn’t see anyone, I just decided to sit down in the lobby and rest for a bit and try to warm up. After sitting for a while, I thought I heard someone moving around in the direction of the dining hall. I got up and went in there to see a Japanese man behind the counter. I got his attention, saying just “Hello” in Japanese. He turned around and asked me what I was doing. I told him I was resting before going to Kumotori Mountain. He said it was before opening, so I had to wait outside. I protested, noting the rain. He said I had to wait outside and that there was a small shelter where I could sit and get dry. Grumbling, I complied, but once I stepped outside I saw that the rain had stopped while I was inside and it was almost sunny. Finally! I ate a bit, filled my water bottles, and continued the climb. As it turned out, it wasn’t that far to the top of the mountain. 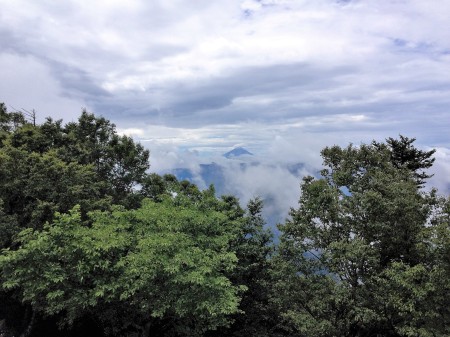 The main path to the summit, the route that my companion from the previous night took to the top. 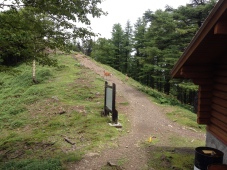 Some of the many deer I saw on this trip.

The view, as you can see above, was mostly obscured by clouds, so I didn’t take a lot of photos. Onward.

As I was making the final ascent to the summit of Kumotori Mountain, I started to notice a bit of chafing around the groin. This was somewhat unusual for me — I’d never chafed before when hiking. Then again, I’d never been so thoroughly soaked for such a long period of time either. This problem would make the rest of the hike less pleasant than I would have preferred, but it would quickly be put in second place next to the issues that would develop with my feet.

Considering the amount of walking I do on a daily basis, blisters are not something I worry about, and indeed even on this trip, where I ended up hiking four days with wet feet, I didn’t get a single blister. What I did get was friction burns on both sides of my right ankle caused by the wet high tops of my hiking shoes rubbing against my soaking wet socks, which in turn rubbed against my ankle with each step (interestingly, no problem on the left side). This issue would gradually get worse throughout the course of the day.

Looking at the maps, reaching Kumotori Mountain wasn’t even half of what I had to do to make up for the time I lost yesterday. I had to move fast. Luckily, since I was already up on the ridge, the amount of vertical distance was small — I had to cover mostly horizontal distance. As I descended from Kumotori, however, I did start to notice an issue with the trail, that being that it didn’t seem to be in the best shape. As it turned out, Kumotori was a popular hiking area, and the far region from Shôgen Pass (将監峠, “Magistrate Pass”) and beyond was also such an area (as I would later find out, that region contains one of Japans “Three Great Passes” or 三大峠). However, the trail connecting them contained nothing quite so impressive as either area, and thus got a lot less foot-traffic and consequently much less attention from the trail maintenance crews. Even the best maintained areas were highly overgrown with mountain grass, which was still dripping with rainwater, ensuring that my feet would only get wetter as the day progressed, not drier. Furthermore, the trail in this section wound along an incredibly steep dirt ridge and was just narrowly cut into the edge, leaving a precipitous drop on my left throughout the whole way. More than once, the edge of the trail would collapse as I stepped on it, nearly throwing me down the side of the mountain, where doubtlessly I would tumble until a tree managed to end my descent. Luckily that didn’t happen. On top of all this, the steepness of the ridge and the looseness of the soil made the area prone to landslides, the remains of which appeared frequently. Some of them were pretty fresh, possibly caused by the heavy rains from the night before. Some had even affected the trail.

One of many bridges over treacherous spots. 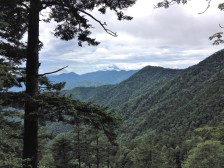 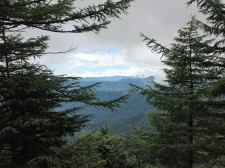 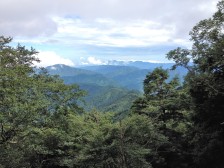 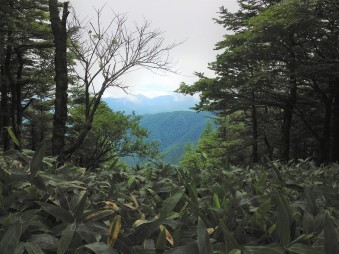 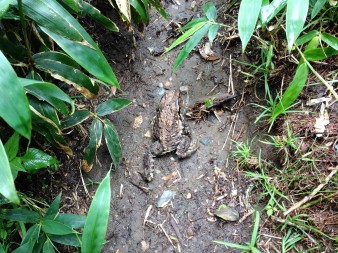 The trail overgrown with mountain grass. 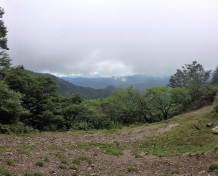 As I walked, the pain from the chafing in my groin and right ankle gradually increased and I began to realize that I had to update my plan a little bit. In particular, there was one peak, Hiryû Yama (飛竜山, “Flying Dragon Mountain,” 2077m), that I would have to abandon. Climbing it meant I would need to ascend for 20 minutes and then backtrack 15 to get back on the main trail and continue. In my current state and with my limited time, I decided to just bypass it. Checking the time estimates for the trail, I figured I could get to Magistrate Pass before dark, where I would find a mountain hut with an adjacent campground. I made this my destination.

The hours passed along with the kilometers as I walked this mostly unimpressive stretch of trail. By sometime around 6:30, though, I finally limped in to Magistrate’s Pass. I was not in a good mood. My feet were still soaking wet, and the chafing wasn’t helping. I located the mountain hut, a dirty, poorly constructed building that looked like it had barely been slapped together. The place seemed totally abandoned, and after poking around for a bit I determined that it had.

I was exhausted and in pain. I set up my tent and, too tired to even try to light a fire, I ate my dinner of Johnsonville brawts cold, crawled into my tent, and promptly fell asleep. As I was drifting off, I decided that if I wasn’t feeling better in the morning, I’d hike straight down the mountain from where I was, find the nearest bus stop, and get back home to rest and recover.

This post is part four in a six-part series on my hiking trip in the East Alps of Japan in the summer of 2017. Click the links below to navigate to the other posts in this series.